How Tread Helped Action Gator Tire by increasing their total leads by over 276.45% 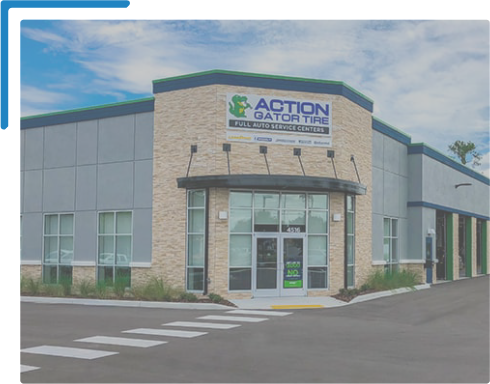 In early 2017, the Action Gator Tire brand needed an overhaul. Since being founded in 1964 by Freddy Christensen, Sr., they’d grown to 20+ locations in central Florida thanks to reputation alone but were struggling to grow their brand in a crowded marketplace.

Lack of consistent cars in the bay

Created new brand identity, brand guidelines, and assets that rolled out to all stores.

Optimized digital efforts & continued testing to improve performance that lead to the non-branded cost per conversion dropping from $57.17 to $8.03 while running brand awareness campaigns.

Created and executed a new multi-channel marketing strategy that led to a 276.45% increase in leads, and a 955% increase in people searching for the Action Gator Tire brand name.

Action Gator Tire had an outdated logo and website. They took proactive steps to fix these problems by hiring a large internet marketing company that boasted about their experience in the automotive industry. Unfortunately, their new website never got off the ground.

“We started the new website project with our previous provider, but they didn’t really listen to our needs,” Freddy sighs. “The [previous agency’s] template site was poorly executed and didn’t match our branding.”

“[Tread] assigned us an account manager. He listened to all of our suggestions, and we knew we could trust him with our brand,” Freddy explains. “We also knew we could reach him whenever we needed help—that level of support is amazing.”

Action Gator Tire’s new website was up and running by May 17, 2017, less than four months after partnering with Tread. The average visitor now spends less time on the site and explores fewer pages because the site is more focused on the user journey. As a result, the on-site conversion rate has increased by a massive 234.38%.

“We launched a new website in less than four months, and the difference is amazing.
Our conversion rates are almost 4x higher without any increase in cost.”

Being in central Florida, the area is no stranger to space shuttle launches. We wanted to tie in the local nature of the community with the longevity of the brand and came up with a clever slogan to do just that: “We’ve been around since before man walked on the moon.”

By having our brand style guide, we could change any assets we needed to be more effective, without compromising the brand across digital, print, and in-store signage.

Before Tread started working with Action Gator Tire, few people searched for Action Gator Tire by name. We took them from hundreds of people a month looking for a location to thousands through ongoing branding campaigns like the “we’ve been around” series.

After restructuring the account to focus on what mattered to the business, we were able to significantly reduce the cost per conversion.

“Tread came up with a plan to reduce our cost per lead. Their deep knowledge of both the automotive industry and multi-location marketing has been essential to our success.”

Restructuring the accounts allowed us to have more flexibility in what brands and sizes of tires we were selling, and what services we were offering. By having messaging aligned with search intent we saw immediate improvement but knew we could do better. By repeatedly testing different messaging and continuously optimizing the account by targeting people most likely to become customers, we ended up significantly improving Action Gator Tire’s Pay Per Click efforts, one step at a time.

Increasing the performance of search then gave the business more free capital to allow us to test other channels and repeat the process to grow the business.

After building out a new website we focused on expanding Action Gator Tire’s rankings. After three years, we averaged 35% annual growth, resulting in a total of 145.58% growth over three years.

“Tread has probably had the biggest impact on our content—we didn’t really have any before,” Freddy says. “Now we have content on our site, including location-specific content and useful how-to guides. It’s rich and engaging and on another level compared to the repetitive, automotive jargon we had before,” he elaborates.

Because Google My Business is so important in local SEO, Tread came up with a strategy to increase traffic to these listings as well. The result was a 747.04% increase in searches that the business appeared for (typically in a result with three listings) and an increase of 1246.95% for the number of times the business’ locations were viewed on Google Maps.

Because we’re focused on results that drive cars into the bay:

the number of people navigating to the business increased by 222.21%

No other agency gets auto & marketing like we do.

See what we can do for you.

“Tread’s deep knowledge of both the automotive industry and multi-location marketing has been essential to our success.

We didn’t know what to expect,” Freddy admits. “But Tread came up with a plan, and their rigorous process convinced us they were the right solution.”

Ready to talk shop and grow your business?

Talk with our team to see how Tread Partners can get your business back on track with a free introductory call.

What can you expect?